Sam, Sibling Rivalry and Laughing Until You Choke! 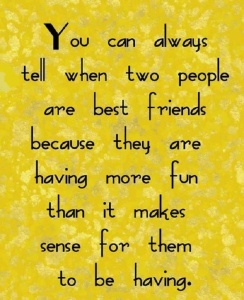 Having fun with daughters is the same as this Pinterest photo…and Sam and I went to Duluth yesterday and just like the photo says – we had WAY too much fun!

From trying on glasses frames…

To giggling about  earlier days…

To almost choking to death in the process!

At one of our stops, I decided to try on a pair of red frames.  The look on Sam’s face when I asked her what she thought, was priceless!  She scrunched up her face and said a resounding “NOOOO!”

We then stopped and shopped at Savers…and rescued a few fantastic vintage pieces from the shelves, along with a few pairs of shoes, skirts, etc… 🙂

We ate at one of Sam’s favorite restaurants:  Noodles (along with the obvious, they make an excellent Wisconsin Philly Sandwich!)

And then one of the other funny moments was in the Dr’s office when he joked with her about not being the 46 year old, then the Dr. jokingly yelled at me for doing a little too much (all while checking my arm and then using it to “almost” punch me in the face for overdoing it.  He then told Sam she was doing great which led to a little strutting on her part!  All in good fun – it’s great to have a Dr. with a sense of humor!

Like the time when Sam was just a baby (with a really big head) and Alex walked up behind her and said “I just want to pick her up and go  “Ding, Dong…Ding, Dong”!  Motioning how she’d pick her up by the head and swing her back and forth.  Alex was about 5 years old.  Do you think there was any sibling rivalry already?

I told Sam that obviously I’d waited too long to have her (4 years between the two) and Alex must have gotten too used to having all the attention to herself!

And then there was the time when Sam said Alex and her friend Tomi had written up a contract for her and her friend Mariah saying that if they were naughty (as the older two were babysitting) they’d have to lick the toilet seat.  ps…Tomi and Mariah are sisters too.  Needless to say I found out about it and nixed the idea.

What’s the wonderful song…”Sisters, sisters…there were never such devoted sisters”.

It wasn’t quite so funny at the time (ok, so it was a little funny)…but now we had a GREAT laugh about it.

Oh…and the laughing until you choke moment?  Yes, that was me.  It added to the excitement as I was driving home at the time, but we survived…

And then we laughed some more!