The Day the Lord Visited Me… 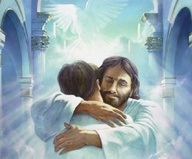 I was led to write this post after I read another blog this morning  (http://www.incourage.me/2013/03/beyond-locked-doors-jesus-where-i-can-hide.html?utm_source=%28in%29courage+Email+Subscribers&utm_campaign=de28761e55-INCOURAGE-RSS-EMAIL-CAMPAIGN&utm_medium=email)

…it truly is the story of when Jesus came to me in my time of need.

You may appreciate it or you may think I’m crazy, but I feel in my heart it is the time to share it.  Do I have apprehension?  Most definitely.  But through my tears of fear, I feel it in my heart…this is my purpose at this moment.

I had been married to my first husband for almost 13 years.  The last three years had been particularly tough, you see I’d taken a different job which earned me more money and I really enjoyed, however my husband was extremely jealous that I was at times working with men.  It didn’t take much to flare his ire which came out in the form of rude comments towards me.

In hindsight I realized I’d even seen this side of him on our honeymoon.  Funny how we ignore those things when we’re “in love”.

We’d had two wonderful girls together.  Built a beautiful log home.  Spent many a family fishing trip with my parents.

All this while I was busy being the “perfect” wife, woman, mother, daughter.

Until I found a job I truly enjoyed working with many people…selling food across our county.  I realized how much I enjoyed people, I felt empowered, I was making friends (both men and women), I was becoming who God intended me to be.  I was a better mother, person, and I thought wife.

Unfortunately things just continued to get worse at home.  It got to a point where I realized I was coming home to a man that acted as though he hated me…every day.  I got to a point where I finally told him that I couldn’t do it anymore.  He immediately stopped, apologized and was better for a few months.  Then it would start again.

The final straw came on Halloween when I had a sales meeting 2 hours away and couldn’t get home as early as I’d hoped.  I called to say I was running a little late and asked if he would get the girls dressed in their costumes and we’d go trick-or-treating as soon as I got home…the costumes were all laid out and ready.

To make a long story short, my oldest daughter looked upset and afraid when I got home.  As I tried to ask what was wrong her eyes darted to her Dad (outside the vehicle) and I told her we’d talk later.  As I tucked her in that night she started crying…those big, heart-wrenching crocodile tears.  When I asked what had happened, she whispered, “Daddy was swearing about you today.”

To say my heart dropped to my stomach doesn’t cover my heartbreak that night.  It was then and there that I knew my girls couldn’t grow up thinking this is how a husband should treat a wife.

I cry today as I write this…

Needless to say this was the last straw.  I knew I didn’t want to be treated like this, but he was a good Dad (up to this point)…but I couldn’t let them grow up thinking this was how marriage was supposed to be.

I went to him and told him again, that I couldn’t go on like this (I didn’t tell him what she had told me in fear of what he’d say to her).  It was at this point that he suggested we go to couple’s therapy.  I was very relieved, thinking “oh – thank you God!”

After we’d “successfully” gone through therapy…he was good for another few months…and then the verbal abuse started again.  At which point he offered to go to therapy again.

Unfortunately, he thought I was the only problem in our marriage.  I’m no saint, and I don’t pretend to be…I was tempted by another man.  But no matter what the therapist tried to point out to him, he wouldn’t see that he had a problem.  He even came home at one point and told me the therapist had told him “If you’re like this with her, no wonder why she’s frustrated!”

We had gone through the winter on and off like this until spring…when he started in again.

I finally had had it.  I knew at this point he’d never change…because he didn’t want to.

I told him I wanted a divorce.

I truly felt that God didn’t want me to feel like this…and I knew again, that the girls couldn’t be brought up with their Dad acting as though he hated their Mom.

Here is when it happened.

As soon as I said the words “I want a divorce”…

I felt Jesus’ arms wrap around my shoulders and hold me.

But I know what I felt.

It was a moment of peace like I had never felt before.

But not just a feeling of peace…

It was a feeling of immeasurable peace…a feeling of Him letting me know that I was doing the right thing.  No question about it.

I still haven’t forgotten the feeling of being held by our Lord.

I don’t write this to bad mouth my ex.  He is who he is and I still hope and pray he let’s God touch him and be a part of his life.  It’s been almost 15 years since our divorce and yes it did affect our daughters, in some negative ways, and in some wonderful ways.

I do know that God still was behind my decision.  How do I know this?

In those fourteen years, I met Tim, who has been my gift from God since our first (blind) date 13 years and 7 months ago. (:))  And we’ve had another daughter together.

All of our girls witness every day how wonderful Tim treats me and I him.  They see how much we love each other even after 13 years.   They watch and laugh at us as we argue about who “gets” to do the dishes.

I write this today to share my amazement in God’s gift of His Son.

And the day His Son brought me peace.

I praise His name daily…and now you know why.

I pray that you see His good works in your life this Easter.

May God bless you all dear friends…

Coffee with Khalua for the win!