Witnessing a Story of Faith, Love and Support 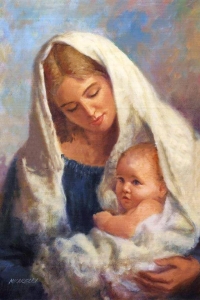 What child is this, who, laid to rest, On Mary’s lap is sleeping? Whom angels greet with anthems sweet, While shepherds watch are keeping? This, this is Christ the King, Whom shepherds guard and angels sing:

Haste, haste to bring Him laud, The Babe, the son of Mary. So bring him incense, gold, and myrrh, Come, peasant, king, to own him. The King of kings salvation brings, Let loving hearts enthrone him. Raise, raise a song on high, The virgin sings her lullaby : Joy, joy for Christ is born, The babe, the Son of Mary.

In this season, this ‘Christ’mas time, may we all stop our fun preparations: the decorating, present buying, wrapping, and cookie making…to reflect on Christ’s birth. The gift God gave us on this day…His Son.

The babe that would grow into a 12 year old child who would sit amongst the elders speaking wisdom in the temple.  The young man who, when baptized, was descended upon by the Holy Spirit in the form of a dove and a voice came from heaven, which said, “Thou art my beloved Son; in thee I am well pleased”.  The man who would die on the cross to save us from our sins.

And God, the Father, watched from above.  He saw all the joy…He saw all the suffering.  He was there through it all…beside His Son.

On our worst days, we may wonder ‘Where is God?’.

We just need to have Faith.

I’ve witnessed this show of faith.

First, in my husband’s Grandpa, who passed 12 years ago:  Frank was at home, having fought a good fight against cancer.  He was in hospice care…and he had faith.  In his last weeks he spoke about seeing Jesus there in the room with him.  And we knew…He was there.  He walked Grandpa home to Heaven…of that there is no doubt.

And in the past few months,  an incredible story of courage, faith, and love has filled our small town – pulling it’s people together in a show of support for an incredible young man suffering from leukemia.

But that’s just part of the story…

This young man was willing to try any attempted cure they could throw at him, in a fight for his life.  His parents reached out to family, friends, and strangers in our community and beyond, asking for prayers as their son journeyed through this illness. And then there’s this community, which stepped up to the plate in many ways.  From endlessly offering them up in prayer…to sending get well wishes…to his classmates recording a YouTube video singing “Clouds” (a song written by Zach Sobiech, 17 year old Minnesota cancer patient who also passed on this year).  These same kids, along with our school’s choirs – grades 6-12, filled our school auditorium’s aisles and sang it again for two very special audience members and their son in Heaven. But the choir director didn’t stop there, he continued their singing with one verse of Silent Night, which ends with the words:  ‘Sleep in heavenly peace’.  And when they finished, there was silence.  A silence that could have moved mountains.  The audience was moved beyond words…beyond the normal response of applause. I’m not sure how long it lasted.  Was it 30 seconds?  A minute?  It wasn’t until the choir members began to leave that the audience began to clap.  The applause came, and it filled the once silent auditorium.  We were applauding for the choir, we were applauding for Sasha’s courage and we were applauding for his parents.  It was an applause of love and support.

As I made my way over to Sasha’s parents to express my condolences, I remembered the conversation we had months earlier.  A chance meeting at the hospital where Sasha and my father-in-law were both being treated.  A meeting of two families, from the same town, who’d never met.  Stories were shared, prayers and well wishes were exchanged.  The courage and love portrayed by his parents was felt deeply. Upon reaching his parents in the auditorium that night, I offered my condolences.  The response I received took my breath away.  “We are so grateful for the time we had with him.”  They didn’t cry, mourning their loss.  They weren’t angry, asking “Why God, Why?”.  They were thankful…and they portrayed incredible strength.

What I witnessed that night was true faith.  They didn’t seem worried about where their son had gone once he passed.

In my humble opinion, they knew.  They knew their son would be welcomed into Heaven, resting in our Lord’s arms, happy and healthy again.  And now he’s their special Angel watching over them and his siblings…until they see him again.

This story of Sasha; his courage, his strength, and the love that was shown by all, has been one of many lessons.

This story of a small town, both young and old, showing their love and support for this young man and his family.

And this story of his parents’ faith.  A faith that shines a light all the way up to Heaven.  To where their son sits with His Son.  Both loved, once upon this earth, and now watching down on all of us from Heaven.

May we all open our hearts to this heart-breaking, yet faith inspiring story of Sasha’s life:

ASK for prayers…for others and for oneself.

Have FAITH…through good and bad.

Be GRATEFUL…for ALL of God’s gifts.

May your life be filled with God’s blessings…and may you be grateful for these gifts.  This is where you will find true happiness, and this is what God wanted us to learn when He sent His son to earth.

With love and gratefulness,

Coffee makes all stories better. Drinking my coffee and lettin' the stories roll.