My parents were known for their outside Christmas decorations.  They’d have people come from all over and stop on the highway to take pictures.  We used to laugh because they kept expanding them…I remember telling them ‘you can’t decorate their whole 40 acres!’.  They’d light up every tree and they lit up the entire house. Then they started adding the big plastic Christmas decorations outside.  And adding…and adding…and adding. 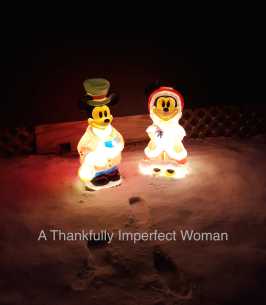 Well, last Spring Tim and I found ourselves in my old hometown so I asked him to drive out to the old house.  My brother took over the payments so that we could convince Dad to go to an Assisted Living facility – I still have no doubt that our being able to tell him the house was staying in the family helped convince him to go.

As we walked around the property I told Tim stories about growing up.  We walked back to the old barn and stepped inside.  I started to laugh as I walked in and found an entire stall FULL, actually overflowing with big plastic outdoor Christmas decorations!  I looked at Tim and said “I need to call my brother and see if we can take these!  I need to put them up in our yard and do an ‘Ode to Mom and Dad’!

Well, an email later and they’d said yes.  Months later we finally made it back down with our truck.  Holy cow!  All was fine until I kept bringing them out of the barn…and bringing out more…and more…and more.  Suddenly I realized Tim was getting a pinched look on his face.  When all was said and done, we’d filled the back of the truck within a foot of the ceiling!

A few weeks later and they were washed, lights fixed where I could…some were just without cords and I decided that was ok. Oh – I forgot to tell you about the mass of extension cords that were hiding under the decorations!  It was all a tangled mess

and some had been ‘fixed’ by Dad.  I chuckled as I threw those away thinking to myself, ‘Yikes!  Thank God they didn’t have a fire! 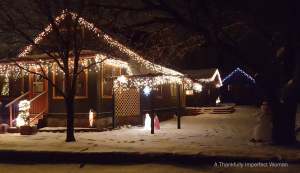 Well, I got them all out and hooked up…and the neighbors have been chuckling since.  I did explain to them that I haven’t lost my mind…that they were Mom and Dad’s.

I did laugh to myself today as I finally got the last of them hooked up and lo and behold Joseph wouldn’t cooperate…his light didn’t work. (He’s on the right in the above picture.)

As you can see, I’m showing you all the lights on the outside of our house…aren’t they GREAT???  I finally convinced Tim to go all the way around the house.

I love this little section of the yard…

Not only do I like the setup, but  the view on the left as you look into the living room is one of my favorites!

Well Joseph wasn’t the only one who decided not to cooperate, Mrs. Santa decided not to work last night either.  Sigh.  I thought about fixing them and

retaking the pictures and then I thought…nah…they don’t expect perfection anyway! 🙂  Can I just say – thanks for that!

As you can see the garden is the recipient of most of the characters.  I do love Santa and Mrs Clause next to the tree…and yes, those are geese next to them.  I have no idea why Mom and Dad had them.  Geese don’t stay up here in the winter! 🙂 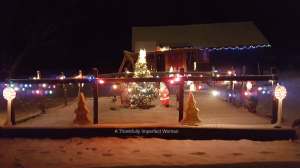 You can see that the elves and the
gingerbread trees and men don’t have lights.

Neither did many of the slim Santas. Speaking of which…what else do you do with 13 (THIRTEEN) of the same Santas?  You make a Santa Choir! 🙂 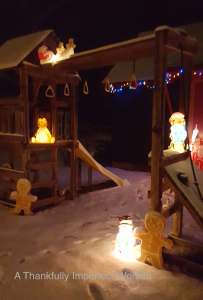 I had to find places for Tigger, a tiny snowman, Santa and his reindeer, and a teddy bear, so I placed them on the play set!

Oh and I couldn’t resist – I HAD TO ask my neighbors if I could decorate a tree on their property…it’s the perfect Charlie Brown Christmas tree!!!  I added the vintage Christmas lights and a red ball on the top that’s just heavy enough to pull it over! Next blog we’ll head into the kitchen!

Coffee with Khalua for the win!